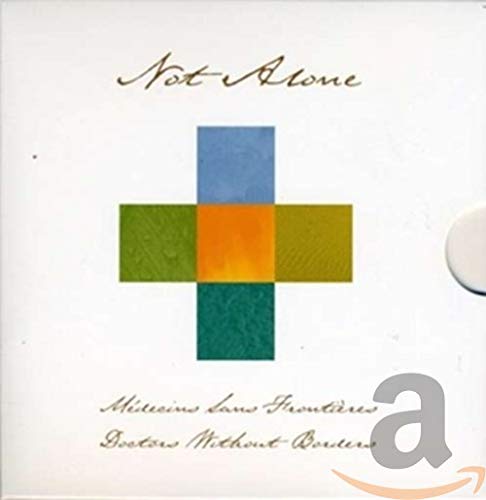 Now this is an unwieldy yet treasure of a thing to be sure. Not Alone -- Musicans Sans Frontieres is a very economically priced, five-CD box set by a loose-knit group of artists under the umbrella "Musicians Sans Frontieres" to benefit the medical association known internationally as Doctors Without Borders. Assembled by Current 93's David Tibet and Jnana/Durtro's Mark Logan, it collects 86 cuts (mostly unknown or new) by 75 artists, many of whom one would never expect to be on a compilation project together. "We Are the World" this ain't. The sequencing must have been a nightmare, but for the most part it flows beautifully. Disc one puts together Durtro artists such as Baby Dee, John Contreras, Little Annie with F rsaxa, Allen Ginsberg(!), Devendra Banhart, Keiji Haino, Matmos and Howie B, just to name a few. The reading of Gram Parsons' "A Song for You," taken from one of the soundchecks from their live album, is a box set highlight and a shining star on this inaugural platter. It's understated, raw, and deeply emotive. Likewise, Baby Dee's "When You Found Me" is a shatteringly beautiful redemptive song that could have come directly from the English-ballad-fakebook-meets-Harry Nilsson -- when he's not busllsh*tting -- and Tiny Tim. Fans of Antony and the Johnsons (who are also on the set) would be well-advised to check this out. There are other moods here, too, such as Haino's "fleeting panic-stricken shriveled equal temperament," a wildish noise scree populated by electronics, unidentifiable instruments and a flute. Disc two includes pieces Japanese improv mystic L, Six Organs of Admittance, Pantaleimon, Aube, Richard Buckner, Vashti Bunyan (an original home demo), Japanese psych rockers Suishou No Fune, Jarboe, Edward Ka-Spel, Larsen, Thighpaulsandra, and Dolly Collins, among others. It starts to really get weird on the third CD. Alexander Neilson and Richard Youngs appear together, Teenage Fanclub is here, as are Charlemagne Palestine, the Bevis Frond, Faun Fables, Isobel Campbell, Jad Fair, and Antony and the Johnsons, all of whom are highlights. But let it be said that nothing here, absolutely nothing, feels like filler, nothing feels tossed off or haphazard. Logan's aesthetic sense is not only keen, but spot-on. He's worked hard not to place things together by genre or subgenre, but sonically. This will be immediately evident should the listener drop all five discs in a CD player and hit random play. Disc four collects Max Richter, Current 93, Pearls Before Swine (a radio broadcast from 1972), Thurston Moore, Bill Fay, Marissa Nadler, Bonnie "Prince" Billy, and Clodagh Simonds; the mood is a bit folksier here, but it is all of a piece, where sonics, lyric concerns and approaches differ widely. The final selection places Marc Almond and Simon Finn on tracks one and two! Jim O'Rourke is here as are Coil, Shock Headed Peters, John Maslen, Small Creatures, and the collection is taken out by Japan's psych-folk rockers Ghost recorded live in Los Angeles in 2004. Along with the five discs and a nice slipcase box, there is a handsome booklet that contains no photos, but a short essay by Logan on how the project came together, his own attitude while assembling it, and complete track information, including when cuts were previously released and where they came from (again, there are surprisingly few, no more than one or two per disc, and even these will be hard to come by for the most part). Perhaps it should also be noted that the complete proceeds from the sale of this box set go to Doctors Without Frontiers. It can be ordered directly from Jnana for $25 plus shipping from the website at www.jnanarecords.com. ~ Thom Jurek, Rovi

Direct link to the article So many little design helper sites!

I had one of those little single-serving designer helper sites bookmarked the other day: getwaves.io. Randomized SVG waves! Lots of cool options! Easy to customize! Easy to copy and paste! Well played, z creative labs.

HTML is Not a Programming Language?

Introduction to the Solid JavaScript Library

Choice Words about the Upcoming Deprecation of JavaScript Dialogs

Three Buggy React Code Examples and How to Fix Them

Just last week I got one of those really?! 🤨 faces when this fact came up in conversation amongst smart and engaged fellow web developers: there is no browser choice on iOS. It’s all Safari. You can download apps that …

Web Unleashed is Back! (Use Coupon Code “CSS-Tricks” for 50% Off)

The lineup is amazing. You’ll hear from leaders in the industry, including Ethan Marcotte, Rachel Andrew, …

I enjoy little frameworks like Tonic. It’s essentially syntactic sugar over <web-components /> to make them feel easier to use. Define a Class, template literal an HTML template, probably some other fancy helpers, and you’ve got a component …

Chris Coyier on Sep 27, 2021
Direct link to the article Collecting Email Signups With the Notion API

A lot of people these days are setting up their own newsletters. You’ve got the current big names like Substack and MailChimp, companies like Twitter are getting into it with Revue, and even Facebook is getting into the …

Ravgeet Dhillon on Sep 27, 2021
Direct link to the article Systems for z-index

Say you have a z-index bug. Something is being covered up by something else. In my experience, a typical solution is to put position: relative on the thing so z-index works in the first place, and maybe rejigger the z-index…

Chris Coyier on Sep 24, 2021
Direct link to the article The Self Provisioning Runtime

The Self Provisioning Runtime

Big thoughts on where the industry is headed from Shawn Wang:

Advancements in two fields — programming languages and cloud infrastructure — will converge in a single paradigm: where all resources required by a program will be automatically provisioned, and

…
Shared by Chris Coyier on Sep 24, 2021
Direct link to the article Comparing Methods for Appending and Inserting With JavaScript

Comparing Methods for Appending and Inserting With JavaScript

Let’s say we want to add something to a webpage after the initial load. JavaScript gives us a variety of tools. Perhaps you’ve used some of them, like append, appendChild, insertAdjacentHTML, or innerHTML.

Frontend Masters has been our learning partner for a couple of years now. I love it. If you need structured learning to up your web development skills, Frontend Masters is the place. It works so well because we don’t offer …

Chris Coyier on Sep 24, 2021
Direct link to the article What is Your Page Title on a Google Search Engine Results Page?

What is Your Page Title on a Google Search Engine Results Page?

Whatever Google wants it to be. I always thought it was exactly what your <title> element was. Perhaps in lieu of that, what the first <h1> on the page is. But recently I noticed some pages on this site that …

Chris Coyier on Sep 23, 2021
Direct link to the article padding-block

padding-block is a CSS logical shorthand property that combines the padding-block-start and padding-block-end properties into a single declaration, creating space around an element’s content in the block (top and bottom) direction.

padding-inline is a CSS logical shorthand property that combines the padding-inline-start and padding-inline-end properties into a single declaration, creating space around an element’s content in the inline (top and bottom) direction.

Frontend Masters is the best place to get it. They have courses on all the most important front-end technologies, from React to CSS, from Vue to D3, and beyond with Node.js and Full Stack.

Another Collection of Interesting Facts About CSS Grid

#114: Let’s Do Simple Stuff to Make Our Websites Faster

The Expanding Gamut of Color on the Web

Curved Text Along a Path